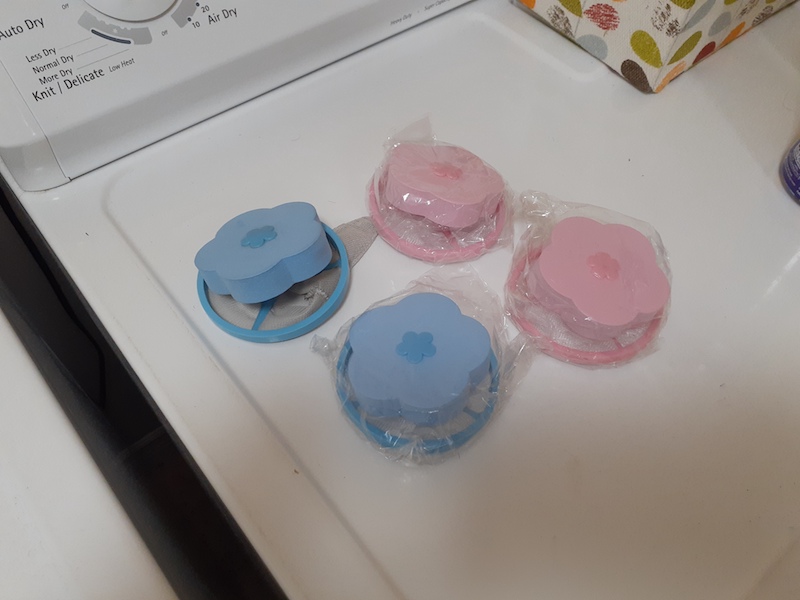 Have you ever heard of these things?? I bought a pack of 4 washing machine lint catcher removers on Amazon a few months back not expecting much. The reviews were mixed but I thought, nothing to loose (except $12).

They arrived individually packaged and I was anxious to give them a go.

They work by floating on the top of the water aimlessly collecting lint that is floating to the surface. They only work on top loading washers which is what we have. Just put the clothes into the washing machine with your laundry detergent…

And put the lint catcher in as well.

When the wash is finished…

Take out the lint catcher…

Now for the fun part, cleaning out the lint from the mesh. (Never thought I would say those words)

The other day I did a light colored wash and there were flannel sheets in it along with towels. The lint it captured was mind blowing.

A couple of notes on this product. They look flimsy but I have been using the same one for a few months now and it has held together very well. Also if you are doing a large full wash, it tends to capture less lint because there is no place for the unit to float on the top of the water collecting lint. I give it a 10 out of 10. I have another pack of 4 in my Amazon cart, you know, just in case.

Another thing I do with dark clothes especially, is when they come out of the machine, I use a lint brush to remove any remaining lint while the clothes are wet. Once dry it seems to be dried on and the lint brush doesn’t help any. Kinda fussy about stuff like that.

Gotta go hang up the clothes.