Hello folks. We are still here, just busy. I wanted to show you how we went about wrapping posts and beams in an older home.

Lets go back to the beginning. Jim got a call from a homeowner who asked us go to his house about 35 minutes away, to see if it was possible to wrap two long and two short beams and two posts in wood. I believe it was an older schoolhouse converted into a home and they wanted to leave the beams exposed. I mean, why wouldn’t you!! I know I would.

With lots and lots and lots of measurements on hand, Jim worked out a plan of how many boards we would need and how wide and long they should be. The homeowner placed the order and we picked up the boards and brought them home to prepare them.

The boards were 14 and 16 feet long so first we had to build a drying rack in the workshop.

Then it was time for stain. The homeowner selected Dark Walnut by Minwax and wanted two coats applied. We used gloves and a cloth to wipe on the stain, making sure also to cover the two sides. It took both of us 16 hours to get the two coats applied with some tight maneuvering in the workshop. It then took several days to completely dry with a fan running.

Before we packed up the truck to head out, Jim assigned each board a letter…A, B, C etc according to his drawings. This helped immensely since there were four different lengths and two different widths of boards. We wanted the seams to land at the posts. Are you following me?

We had to pick a couple of non-rainy days for the install since we were doing the cutting outdoors.

We decided to tackle one of the long beams first. This one was pretty straightforward. That’s not to say it was easy. In an older building such as this, nothing was square or even. The ceiling included. But Jim is not one to give up so here was the first section installed. One board on either side of the beam and one underneath. And the seam landing on the post.

You can also see in the above picture how we had to use spacers. Sometimes with shims on top. Lots of shims. Jim made these shims on the sawmill for this purpose.

Then it was time to bring in another board. With each one we did a test fit, brought it out to be trimmed, another test fit, and more trimming when necessary.

At the end of the first day we had the whole beam and post covered. On the second day we tackled the harder of the two. This one ran into a set of stairs and the beam being made of five 2×10 boards laminated together, and along the length to reduced to four boards, none of which were square…or flush…or level…or plumb.

This is the before of the second beam and post.

And here is the after…

‘All in a day’s work’, as they say. This beam and post carried through to the second floor.

In case you thought we were done…nope. The beam by the stairs also ran into a wall and came out the other side.

We cut away the drywall in that section and continued the beam wrap all the way to the outside wall. That took care of the second day.

The first beam also continued through the wall and into the next room so we had to go back on the third day to finish up. This one was a shorter beam that didn’t take long to cover.

We used glue and a nail gun for the install and even though the holes were tiny, with the wood stained so dark you could see every teeny tiny nail hole with the lighter wood from inside showing. I used a q-tip, the walnut stain and a cloth to touch up every nail hole. It did the trick and looked fantastic. I also ran a little stain down any seam to make sure no lighter wood showed. It was worth the effort.

Here is another quick shot of the two beams. Before…

With the job complete, I’ve been looking around our house to see where beams could go, even if ours were fake. Who would know! Well probably all of you cause I would have to show you. Now I just need Jim to think it was his idea so he would be onboard. 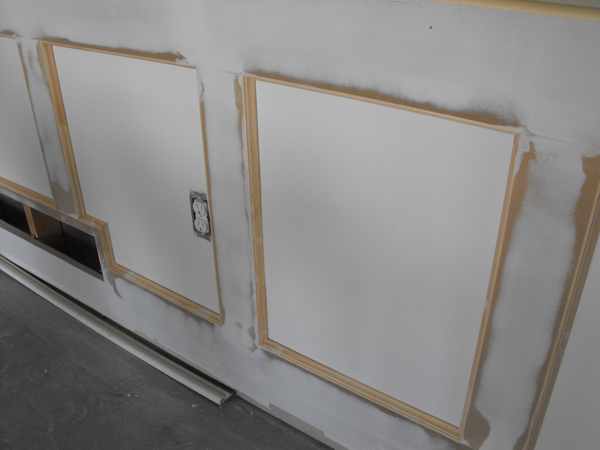 Wainscoting in the basement part 16

Wainscoting in the basement – the finale