I had this idea for measuring and crating firewood that would not involve as much lumber as the previous crating experiments I was trying out. This new method involved pallet strapping. I built a “jig” that holds the supplies and the 32 x 48 ” pallet that will hold the split firewood. The idea was to stack the wood 36″ high, resulting in 32 cu ft of spit firewood (1/4 cord). Sounded like a good plan.

The palletized firewood would then be set aside to dry, and when ready (dry), simply pick up the pallets with the skidsteer and forks at time  of  delivery. Its all theory, and it needed to be tested. Well, the first test run didn’t quite go as smoothly as planned. Does it ever!!! Once we figured out the strapping tool and how to strap the banding, it was time to move the pallet from the jig and onto the truck.

This is where things fell apart, sort of, well it actually did fall apart. The movement with the skidsteer caused the 4 narrow planks which weren’t attached but were being used to support the sides, to shift and two fell away causing the firewood pile to collapse somewhat. Sh#t.

Not defeated, but since we were in a time crunch that day to get at least 64 cu ft split for a customer to pick up this evening, we resorted to our earlier method which we knew would work. An all lumber crate.

With the order done we drove off into the sunset… or home, but sunset sounds better.

So we learned a few things that day. First, always bring snacks. Second, screw the supports to the pallet. Third, Gina needs a belt for her new work pants. And lastly… try, try again.

Before night fell, the customer came along and picked up half the order. I guess he’ll have to come back next year for the other half. 🙂  We had just split the maple. The forester whom I bought the logs from said the logs were cut 8 months ago. A moisture meter reading showed a 4 inch round piece split in half to be 10% moisture content. Excellent, ideal for firewood. 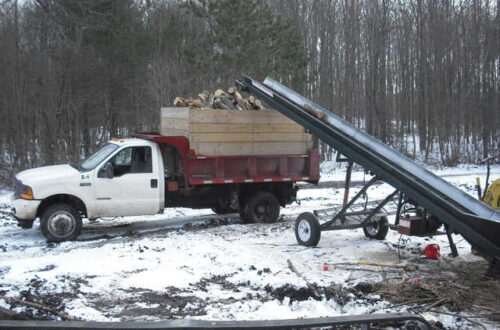 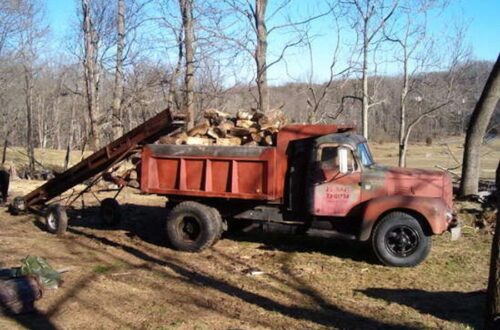 Firewood from around the world. 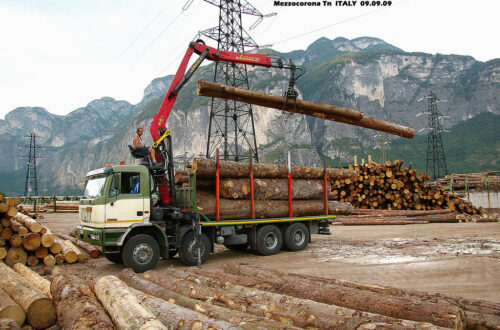 Firewood around the world