I know, I know, it isn’t Christmas just yet but when it comes time to decorate I like to have all my ducks in a row…or in this case all my stockings in a row. I keep saying sewing isn’t really my thing, but some things require the misery in order to get to the finish line. Case in point…I wanted a couple of decorative Christmas stockings. I have plenty of material left over from my sewing spree earlier in the year that I decided to use. And that material is drop cloth or painters cloth.

I drew out a pattern for a stocking and then decided it looked a little small so I re-drew the pattern making it a little bigger all the way around.

I cut out four pieces of cloth, two for each stocking. Then I cut out the pattern and traced around it with marker onto the material.

Now for the fun part. I wanted to add red plaid to the top and happened to have some red plaid hanging in my closet in the form of a shirt. This shirt had issues so I was ok with sacrificing it for these Christmas stockings. I cut out two strips of the plaid.

I took my patterns to the sewing machine and sewed two together just inside of the marker line and trimmed the excess. Then I turned it right side out and this is what I had.

The good thing about this material is there is no front or back. One less thing to worry about. I sewed the other one the same and turned it right side out as well.

I had planned to also sew the plaid onto the top of the stocking before sewing the stocking together but I couldn’t see how that was going to work, so I changed my mind. I decided to break out the glue gun to attach the plaid cuff to the top.

Here are the finished stockings, I also added a red ribbon to the top for hanging them up.

Here they are hanging in the entryway, just for scale.

While I had everything out I also made a Christmas table runner using hot glue for the hems instead of sewing. Figured it will only be out of storage for a few weeks a year. Used painters tape and red paint for this one. You can read about that process here.

Still on a roll, I decided the faux grain sack pillows I made earlier this year could stand some Christmas cheer too. I didn’t really want to make pillow covers so I took strips of the same drop cloth material and painted them…

I considered adding ribbon on each side but decided to just fray the edges slightly. I wrapped the newly painted strips of material around the pillows to cover the stripes and sewed the two ends together. After Christmas I will just slip the Christmas cheer right off of these pillows.

With all these preparations you would think I loved Christmas. You would be wrong. Least favorite holiday. I just like to be ready. 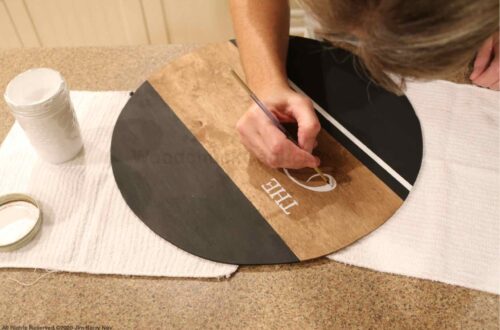