Why does everything take so long to do?  Or is that just us? The week long heat wave finally ended and with logs piling up waiting to be sawed, we headed out to try and make a small dent. First things first, we had to build another pallet. We used tamarack lumber for the job and to get that lumber, we had to saw tamarack logs on the mill. That meant half the morning was gone just to make the pallets, never mind the pile of logs we are trying to get sawed. But, first up was changing the blade on the sawmill.

Here is one of the pallets we built.

Funny thing happened on our way to the mill. Sounds like the beginning of a joke.  I was hammering nails while we were building the pallet. It was taking me forever. Probably 7 or 8 whacks with the hammer per nail. Jim said he would show me how to do it quicker. He picked up the hammer and with three swings the nail disappeared into the wood. Then he got cocky!! He figured he could do it in two hits. So he swung a little harder. You guessed it!! He hit his thumb right on the nail part. Wrong nail.

Maybe this is why it takes so long to get things done. I think we should have built our house right next to the hospital. Kidding. Kinda.

Our goal for the day was to get the three logs on the crib GONE. They have been sitting there for over a month. First one closest to the mill is hemlock, second one is rock maple and third one is birch and probably firewood, or so we thought. There is another huge birch one on the ground which is definitely firewood.

Actually the maple one in the middle is from this tree we cut down in the spring.

Once we had the hemlock cut into lumber we started on the maple. It was huge. We rolled it onto the mill to get started.

We sliced it into one inch thick and 1/2 inch thick slices. We left the live edge on. The thinner boards we will use to cut out maps of Nova Scotia once they are dry. For these ones, we sliced, brushed off the sawdust, cleaned up the edges and carried them into the shipping container. We also label each pile so we remember where they came from and when we milled them.

After lunch we headed out to deal with the two birch logs. The one on the crib was too big and heavy to roll onto the mill so Jim used the skidsteer and grapple to pick it up off the crib and place it on the mill. We still had to man-handle it into place. Jim said it was the maximum capacity for this size mill.

It was supposed to be firewood but the slices were so beautiful we ended up slicing it all into one inch and 1/2 inch thick lumber. I am starting to see a trend here. Wood comes in for firewood but is too nice to burn.

Here is the birch all strapped up and labeled. Now if the kiln was ready it would go straight in, but for now it will go out back and begin to dry naturally.

At the end of the day we had intended to cut the last large birch for firewood but before we could get started, Jim struck the same thumb he hammered earlier in the day while stacking lumber. We were done. Time to soak the thumb in ice water again and grab a cold one. 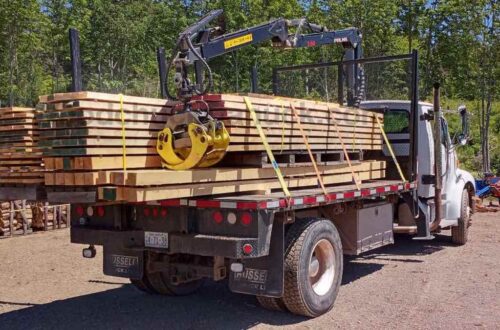 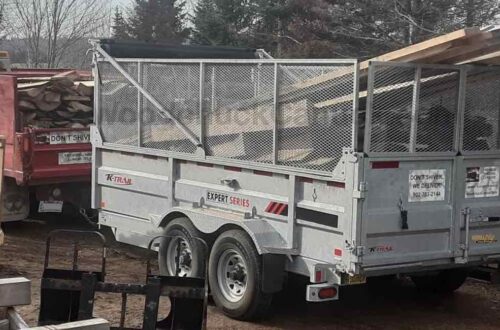 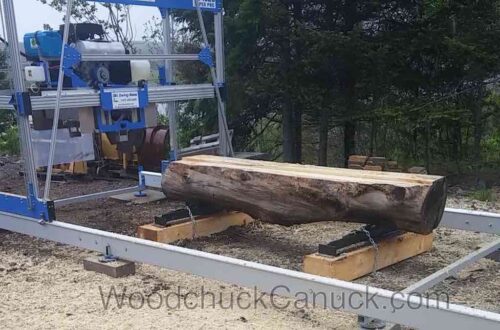