With our office work done for the day, (is it ever?) and rain blowing sideways, we decided to make some cake donuts. A while ago we tried the donuts baked in the oven, even bought the proper pan, but nothing replaces fried donuts. It’s not our first donut rodeo though, we’ve been making these at home for a few years now, and for about 20 years before that in a commercial fryer at our bakery.

Just like when we bought a meat slicer for cutting donair meat, we bought this fryer just for making donuts. We have never fried anything else in it, only donuts.

The first few times we made them we actually took the time to make them into rings, and while they looked awesome, it was time consuming. Now we just scoop the dough with a small ice cream scoop. Also we could only fry a couple of rings at a time, whereas we put 8 bits in at a time. The bits aren’t prone to breaking apart as much either.

While Jim makes the batter…

I whip up the glaze…

We have tried rolling them in sugar before. We find that when they go in a container, the next day the are wet. Who wants wet donuts. Not me! So we stuck with coating them in glaze.

With the batter and glaze ready, Jim starts scooping the batter onto a plate. Meanwhile the fryer is up to temperature and its time to get frying.

This recipe calls for them to fry for 2 minutes and 45 seconds. We submerge them and weigh them down with a homemade screen. Easier to get them to cook evenly.

When the timer goes off, Jim drains them for a bit and shakes them into the glaze.

I roll them around in the glaze and lift them out one at a time to a cooling rack.

We made a single batch which yielded about 30 donut bits. We only used half of the sour cream so before the week is out we will have to repeat the process. Not complaining.

Now if Jacob were still here he wouldn’t want to be left out of the fun.

I was looking through old pictures and came cross this old tin punch clock that we made many moons ago. Check out the wallpaper boarder. I think it was the 80’s.

They say April showers bring May flowers. If that is the case we should be over-run with flowers in about a months time. 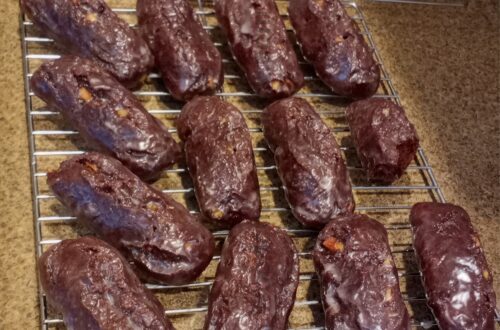