We had a beautiful warm-ish weekend considering it is getting late into November. Can’t complain yet! If you remember we were swimming in mud. We still are, but we are working on it.

On Friday afternoon, Jim ditched on three sides of the mud pit newly cleared area. Saturday we went out to see what it looked like and found the ditch full of water. Thats a good thing. The water was 7 – 8 inches deep.

And around the back…

We decided to have that water drain under the road to the lower side, so Jim started digging at the other end first.

Once we got about 3/4 of the way to the ditch we laid down flexible weeping tile. A larger one would be better, but this is what we had on hand.

Jim covered that over with dirt, and then we continued digging towards the ditch.

Just clearing out a few more rocks by hand…

Then we laid the rest of the weeping tile.

We covered that with dirt and then broke through the last of the dirt holding the water back.

Hopefully, and I’m pretty sure, this will make a difference.

Before I go… we had to move some of those wood slabs from the mill to get to the weeping tile before we could begin this project. That was a comedy of errors… 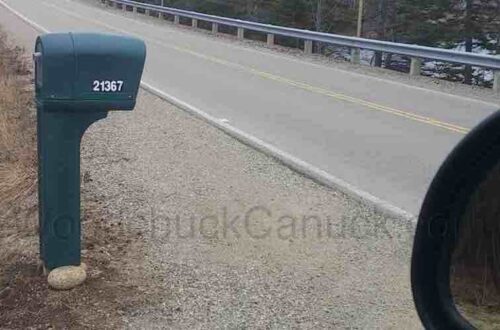