Happy Thanksgiving. We had a busy weekend.

On Friday afternoon, we met up with Dave Restoule, the arborist we worked with a few times before to take down the remaining trees at my Moms place. In May (hard to believe it was that long ago) we worked with Dave to take down, I think it was 4 maple trees that were 70 feet tall. Got a nice bit of firewood from those. Some were rotten at the base though.

This time we were tackling the 6 remaining trees that were pine. Most of the branches on the bottom two thirds of these trees were gone from weather and age. They were definitely top heavy. Also there are power lines between the trees and the pavement. They weren’t a problem this time.

Here is what they looked like before we started.

We decided to get the trees down and worry about chipping the branches later. We prefer to chip as we go, then when you are done cutting the last tree and it is all chipped, you are finished. This time we had a real mess to clean up after the trees were all cut.

Dave started on the first tree.

He climbed about 2/3 of the way up the tree, which were very slippery,  and tied his ropes. Then Jim took the other end and tied it to the skidsteer. Once he was back on the ground, Dave would start cutting the tree.

Jim would keep the rope tight and on Dave’s signal, Jim would back up to ensure the tree would fall where we wanted it to.

Since we weren’t chipping right away, Jim and Dave would cut the branches off the downed trees and we would make piles near the chipper and also to get them out of the way for the next tree to fall.

This picture shows a tree on its way down. They make an incredible noice hitting the lawn. And some of the branches dig into the lawn.

At the end of Friday, we had all 6 pines down, but more work ahead of us.

Saturday morning was spent getting the chipper working. We went over and brought the chipper back home with us. Jim found the problem and fixed it and we were ready to chip.

After lunch, the three of us met up at Moms and got to work.

Lots of dragging and chipping and raking.

On Sunday, Jim and I went back to deal with the logs. They were about 55 feet long and we decided to cut them into 8 foot lengths. We loaded the smaller ones first since at the site we could use the skidsteer to load the trailer but once we got them home we had to use our already sore muscles to get them unloaded.

Once we got home with the second heavier load, we unhooked the trailer and went to get the skidsteer.

Then it was time to get these logs off the trailer.

One final look at the completed job. Took one full day plus two afternoons with Daves help.

Thankfully today is a holiday. I think we need a little break. 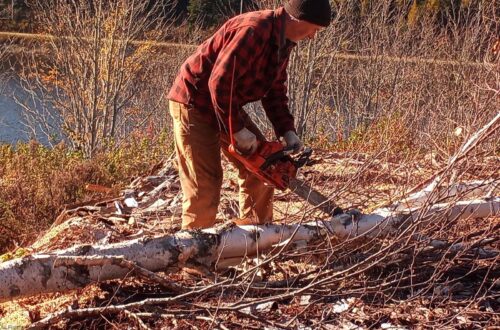