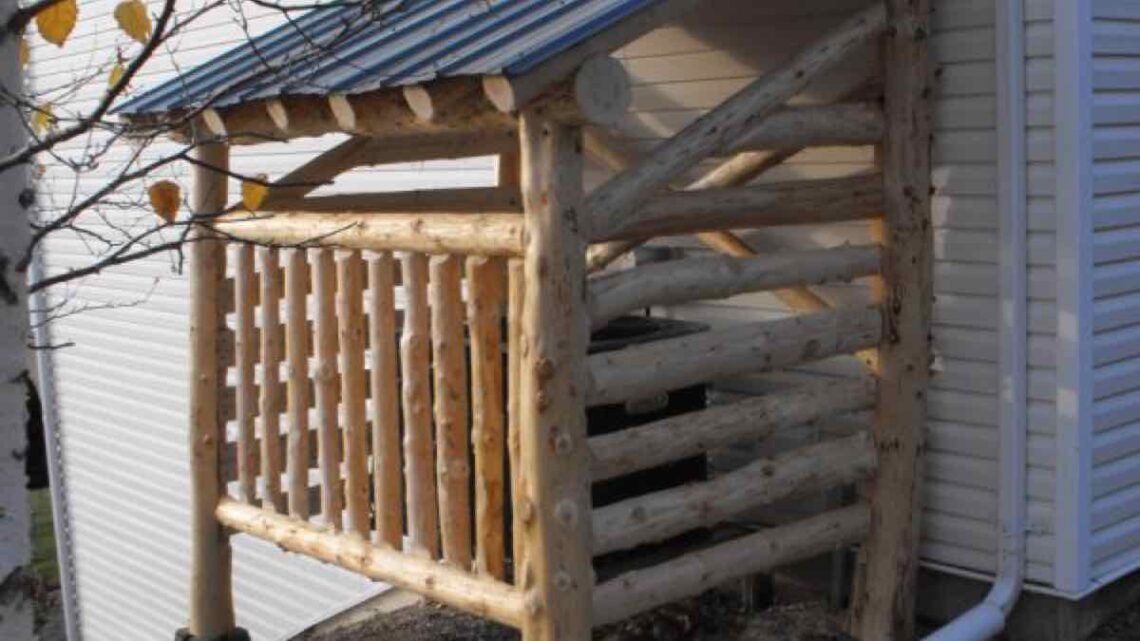 The shelter will be a 3 sided structure with lattice sides. Air flow is important for a heat pump so the side walls will be a foot off of the ground to allow the unit to draw air in. When the snow gets deep the lattice will hold back the snow until I can shovel around the unit.

I have decided to build the shelter using logs for a couple reasons.

It all starts with peeling logs. I’ve already posted about this the other day, so you can jump over here to see that article.

I will be using concrete deck blocks to rest the posts on.

The blocks were recycled from a deck rebuild we did last year.

So now its time to mark the square pegs that will keeps the posts on the deck blocks.

I start with a block template I cut measuring a true 2 x 4 inches. I want the post to be centered on the block so the template is drawn on one side of the trees center, then moved up and drawn on the other. I now have a 4×4 square pencil line.

Time to get busy cutting the pegs.

I remembered that the square hole in the deck block is not a true 2×4 inches. So I used another template that’s the same size as a S4S stud lumber, that 1-5/8 x 3-5/8 inches. So a little trimming with the chainsaw and we’re back in business.

The log has to have a notch to accept the lattice frame. The next step is to snap the chalk lines to remove 1/4 of the post.

I’ve never done this before so it was a slow and careful process to ensure not only accuracy but safety too.

It took about 10 minutes or so to cut out the piece, a lot of back and forth, nibbling away at the depth so as not to cut too far. I think I did pretty good considering it was the first time doing it.

All that was left to do was install the post and brace it. Notice the bracing is recycled from the deck torn down last year.

The post in place I stepped back for a look. Its a beast of a post standing there 8 ft tall. It probably won’t end up being that tall but its better to have more than needed than not enough.

This week will be spent cutting the 3 other posts and installing them. If I can get time to do one each day, I’ll be lucky. But that’s the goal.

Here’s a quick video of the work I did above.

I don’t always work this fast,
but when I do,
I provide video evidence 🙂

This is where I am at right now. The bones are up. Now working on the roof purlins. I have two made and I need at least 2 more to span the 90″ of the roof beams I cut. I am using 3 metal roof panels , each 30 inches. Hence the 90″ length. I need a purlin on each end and one under each overlap of metal, so four for sure. and I might also need one purlin in the middle of each 30 inch panel. So a total of 5 more to peel and cut in place.

I’m now researching heavy duty screws. The local store is sold out of the 4″ Timber-tite I need to secure the purlins. Timber-Tite screws were also a tad bit expensive. Over $1 each. Having recently purchase a +- 25lb each of deck screws in varying sizes, those too were expensive. That might just be sticker shock for me because its my first time looking at purchasing these type heavy duty timber screws.

Luckily, I found FastenMaster on Facebook who were quick to reply and very eager to help. Kudos for customer service. Its a rare sight these days, so its welcomed. Working with them now to see what I can get in heavy duty flat head type screws.

Today was a fine weather day so we got outdoors to finish off the purlins for the shelter. We selected five more logs, each about six feet long and about 4.5 inches diameter at the larger end of the log. We peeled the logs and then set about placing each one to the same height at the purlins previously placed. I also got to use the FastenMaster screws that showed up Friday. They worked perfectly.

I got about a little less than 2 hours this afternoon to work on the shelter. It rained most of the time while outside, no problem though, that’s what rain coats are for. I finished the sides, shown here.

I ripped a log in half and once I added these cross braces the shelter become rock solid.

Here’s a close up of the FastenMaster screws I used for some of the connections. Solid.

Today I took some time to cut the metal for the roof from leftovers when we built the house. Then drill and tap the screws in place.

All done! This took longer than expected but it was a fun project. How long it lasts, time will only tell. It was a great way to practise some chainsaw work. I also learned that peeling logs can be quite relaxing! 🙂

Feel free to add your comments below, would love to hear form you and any tips you might have.